The growing fetus and hormonal changes bring about various changes in the body of the pregnant woman. As the saying goes, the only constant thing during pregnancy is change itself which affects from hair to toe of the pregnant woman. Every month, the mom-to-be sees some new change taking place in her body like swelling in the breasts, increasing bump of the abdomen, weight gain and many others that could easily overwhelm her.

The uterus is the safe place where the baby grows in the mother’s womb. In addition to the baby, the transient organ placenta also grows in the uterus, which nourishes the baby through the umbilical cord. During the gestation period, the uterus expands up to approximately 1000 times its original size, which displaces the center of gravity in the body of the pregnant woman, especially during the last stages of pregnancy. 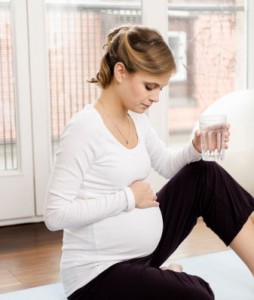 As the uterus increases in size, the woman feels pains and aches in lower back, which has to support the extra weight. The enlargement of uterus affects the digestive system, causing disturbances in normal functioning of urinary tract and digestive system.

Though an expectant mother is ready to see her bump grow, she is going to watch her breast swell and increase in their size, long before the belly starts to grow. The placenta excretes hormones like HCG, estrogen and progesterone which prepares the mammary glands for nursing. With the progress of pregnancy, the breasts become tender, swollen and fuller with changes in the color of nipple and areola, which darkens by few shades. Some women experience soreness in breasts, especially in the nipples.

Surprisingly, changes in belly takes places at a much later stage of pregnancy. At first there is weight gain in the body, in preparation for lactation and nourishment of the growing fetus. There is storage of fat on waistline, hips, thighs and buttocks much before the belly starts to protrude from front.

With the stretching of skin over the abdomen, the belly button changes its appearance and may protrude.

The tremendous strain on the abdominal skin leads to stretch marks. Liniea Nigra, a thin dark hairline appears on the tummy, running down from the belly button.

To nourish the baby and enlarged reproductive organ, the volume of blood increases by nearly 50% during the course of pregnancy, though it results in decrease of RBC and hemoglobin. The heart has to work harder to pump the extra blood; therefore there is slight increase in the heartbeats during pregnancy. Due to the pressing of uterus on the veins in pelvic region, there is poor circulation of blood in the legs producing varicose veins and swelling of feet.

Normally, the bones of the pelvis are hard, which would make the passing of baby’s head through it a difficult process. To make the delivery of the baby possible, the body secretes a hormone known as relaxin which relaxes the cartilage binding the bones together, thus loosening the pubic symphysis. The drawback is that the other joints are also affected by the hormone causing joint and back pains in pregnant women.

The increased blood flow, retention of fluids and hormonal changes gives the pregnant woman the bright look known as the pregnancy glow. The darkening of skin, known as chloasma, may also make its appearance during pregnancy. The facial/body hair and nails grow faster.