Surrogate pregnancy refers to a process where the sperm of a male whose wife is unable to conceive, is allowed through artificial insemination to fertilize the ovum of a woman who has agreed to bear the child for the couple. The surrogate mother is often bound by a contract to give up every right on the child after the birth.

The process has been a blessing to childless couples, who feel genetically connected to the baby. But at the same time, many people are against surrogate pregnancy as the surrogate mother goes through a great deal of emotional turmoil; some even consider it as a formalized form of baby selling.

Though the father will be the biological father of the baby, the mother is left out in most cases of traditional surrogacy. However, in gestational surrogacy, the unborn embryo is placed in the womb of the surrogate mother until birth. 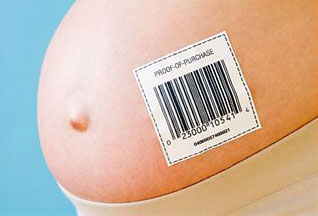 There is no way law can ensure that the women who are chosen for surrogacy are not exploited by coercion or commoditization. Who is to decide whether the body of a woman can be used through contract for a purpose like childbirth? What happens when the surrogate mother decides to abort the gestational embryo half way through the pregnancy? All these questions lead to ethical debates about surrogate pregnancy. It is also tough to decide the rights of the baby to know about the people involved in his/her birth.

Though it is often argued that the woman acting as surrogate mother goes through a great deal of emotional turmoil, studies contradict it. Many women confess that they feel empowered after helping a childless couple enjoy parenthood. Most of the surrogate mothers are known to distance themselves from the fetus psychologically during pregnancy, which facilitates the relinquishment after childbirth. The relationship she has with the commissioning couple also contributes a great deal to her psychological wellbeing.

During pregnancy, the baby growing in the womb has power to create a bond with the woman who is carrying, irrespective of the fact whether she is surrogate or biological mother. When the woman develops attachment to the baby, then it becomes tough for her to give away all her rights after childbirth. In such cases, the couples who commissioned for surrogacy, and have patiently waited to hold the baby, often go through emotional breakdown.

Many legislatures are still pondering over various bills related to surrogate pregnancy, as the issue comes under attack and counter attack from different groups. Surrogacy for long has been one of the most contentious answers to infertility.

After childbirth, if both the parties adhere to the agreement entered into prior to conception, then there are not many legal issues cropping up. But problem arises when there are differences in opinion after conception; like it happened in the case of Baby M of USA, whose legal parentage case led to great deal of controversy. The law cannot enforce a woman who bears the child to totally give up all rights over the baby if she desires to stick to her rights.