Sometimes you may experience pregnancy symptoms without being actually pregnant. There are several terms used for a false pregnancy – it is sometimes called hysterical pregnancy, or more correctly as pseudocyesis or pseudopregnancy (in the case of mammals other than humans). This is a phenomenon seen frequently in animals such as dogs and mice; but less frequently in humans as well.

What is a false pregnancy?

It is thought that certain endocrine system changes could give rise to a false pregnancy, causing physical or psychological symptoms of pregnancy without a woman actually being pregnant. 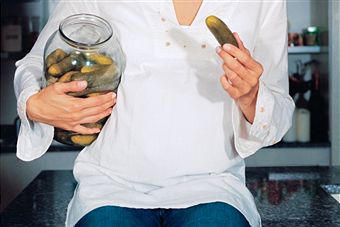 This condition may be differentiated from couvade or “sympathetic pregnancy”. This happens when the partners of a pregnant woman develop symptoms similar to those that the pregnant woman experiences. A false pregnancy is also different from having delusions of pregnancy (as with schizophrenics) or pretending to be pregnant.

It is most often thought to be a result of a woman’s acute desire to become pregnant that could cause these symptoms. A woman could have psychological issues that could trick her body into thinking that she is pregnant. A desire to get married, menopause and repeated miscarriages could be among the reasons. Low level of education, childhood abuse and other factors are also thought to trigger false pregnancy.

False pregnancy symptoms could continue for a few weeks to a few months. They can even last the full nine months or could in cases last for several years.

A woman may stop menstruation and may start to feel all the early pregnancy symptoms. She may develop morning sickness and nausea, feel tired and exhausted, and even experience breast tenderness and enlargement.

In a medical exam, though no fetus or heartbeat will be detected, a doctor may find that the woman has an enlarged uterus and a softened cervix.

Very rarely, some women with a false pregnancy may be so sure of being pregnant that they may go into labor and arrive at the doctor’s office for the delivery.