Gestational diabetes during pregnancy is a pregnancy complication that is important to keep in control because it can lead to very large babies and hence delivery complications, jaundice and low blood sugar. This condition also increases risk of developing Type 2 diabetes later, after the birth of the child.

1. Women who are overweight or obese are at a higher risk of developing gestational diabetes. Getting to a healthy weight before getting pregnant is a good way to try and reduce your risk. 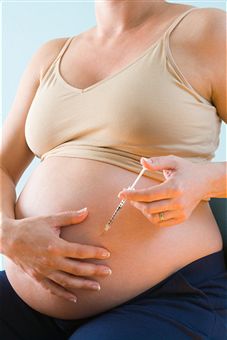 2. Women who have had gestational diabetes during a previous pregnancy or those who have been diagnosed with impaired glucose tolerance are also at higher risk.

4. Women with polycystic ovarian syndrome are also thought to be at higher risk of pregnancy diabetes.3. Having a family history of type 2 diabetes and higher maternal age (over the age of 35) are other risk factors.

5. Women who smoke are at double the risk of developing this pregnancy problem.

6. South Asians, African Americans, Hispanics, and Native Americans are some ethnic groups that are seen to be at higher risk of gestational diabetes.

How to detect gestational diabetes during pregnancy

Gestational diabetes may often be asymptomatic and may show no outward signs. In many cases the condition may be detected only when tests are performed.

Women who are at a higher risk of developing this condition during pregnancy are required to be tested early in their pregnancy. Other women are routinely screened for diabetes early during the second half of their pregnancy (about the 24th week gestation).

When symptoms do present, they could be the same symptoms that are present with type 2 diabetes that could manifest with pregnancy diabetes as well: a woman could feel thirstier than usual. And because she is drinking more water than usual, she may find herself having to go to the bath room more often as well.

There could be increased hunger with diabetes, and in spite of eating more a woman may still find that she loses weight.

Blurred vision is another symptom of gestational diabetes during pregnancy because high blood sugar can affect eyesight directly.

Women can feel tired and drained of energy. They can also find that they feel more irritated than usual and feel down in the dumps.

If any of the above symptoms are seen, the doctor should be contacted at once, so that the condition diabetes can be managed and kept under control.